Presented by Gershom Gorenberg, in person and via live video stream with interactive Q&A.

War of Shadows:  Code Breakers, Spies, and the Secret Struggle
to Drive the Nazis from the Middle East

At the midpoint of World War II, an Axis army under Field Marshal Erwin Rommel was on the brink of conquering Egypt. Drawing on his latest book, War of Shadows: Codebreakers, Spies, and the Secret Struggle to Drive the Nazis from the Middle East, historian Gershom Gorenberg will reveal the espionage affair that led to the British victory against Rommel at El Alamein—turning the tide of the war and preventing the mass murder of the Jews of Egypt, Palestine and the rest of the Middle East. Based on documents that remained classified for decades, War of Shadows demolishes myths of World War II and solves the mystery of the spy affair that nearly brought Rommel’s army and SS death squads to Cairo and Jerusalem.  From the Kirkus book review: “Gorenberg’s gimlet eye reveals a remarkably unheroic Rommel, unimaginative British generalship, know-it-all American leadership, and a delightful cast of colonial officials … unhappy Egyptian royalty, Arab nationalists, adventurers, and even two bumbling Nazi spies out of central casting.”

Gershom Gorenberg is a columnist for The Washington Post and a senior correspondent for The American Prospect. He has written for The Atlantic Monthly, The New York Times Magazine, the New York Review of Books, The New Republic, and in Hebrew for Ha’aretz. He will return to the Columbia Graduate School of Journalism in 2021 to teach his workshop on writing history.  As a commentator on Middle East, Gershom has appeared on Sixty Minutes, Nightline, Fresh Air, and on CNN and BBC. He has lectured at the Council on Foreign Relations, the Carnegie Council, the Washington Institute for Near East Policy, the Middle East Institute, the Wexner Graduate Fellowship, and for universities, congregations and other organizations seeking an insightful view of politics, Mideast affairs and religion. He lives in Jerusalem with his wife, journalist Myra Noveck. They have three children – Yehonatan, Yasmin and Shir-Raz. 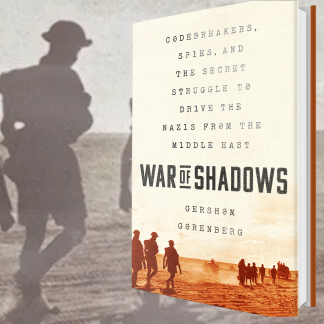