Presented by William Fredlund, Ph.D., in person and via live video stream with interactive Q&A.

Salvator Mundi (”Savior of the World”) is a painting of Christ attributed in whole or in part to Leonardo da Vinci. Thought to be a heavily damaged copy of a lost original, it was rediscovered in New Orleans, restored, and included in a major exhibition of Leonardo’s work at the National Gallery, London, in 2011, though only some scholars consider it to be an original work by Leonardo. The painting sold in 2017 for a record $450 million dollars, purportedly to a representative of the Saudi crown prince, Mohammed bin Salman, and its present whereabouts are unknown. The controversy surrounding the painting’s murky provenance and astounding sale has led to two fascinating 2021 documentaries: The Savior for Sale and The Lost Leonardo.  So—is it an original da Vinci?  Come decide for yourself! 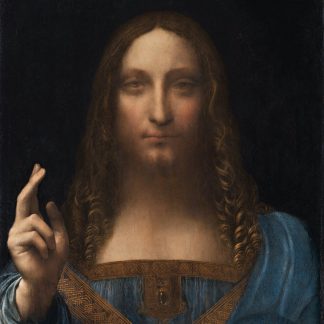