Scott Joplin is well known today as the “King of Ragtime”. Although not the creator of ragtime music, Joplin used a combination of Afro-American folk music and 19th-century European romanticism to elevate the genre above its “cheap bordello” origins, creating a new art form, the classic rag. These compositions, consciously written as classical music in miniature form, exhibit a style that is more tuneful, contrapuntal, infectious, and harmonically colorful than any other of his era, an achievement akin to what Chopin had accomplished earlier with the mazurka. With its syncopation and rhythmic drive, Joplin’s ragtime expressed the intensity and energy of early-20th century America, especially for young urban audiences indifferent to Victorian proprieties.

This presentation will examine Joplin’s impressive achievements, not only in ragtime, but in other genres as well, such as ballet and opera, using lecture, audio, and video. Listeners will come away with a much deeper appreciation for a great composer who revolutionized American music and culture, and whose influence on subsequent composers (such as Ravel, Stravinsky, Copland, Shostakovich, Barber, and Gershwin) and future genres (such as jazz, blues, and the Broadway musical) was immense. 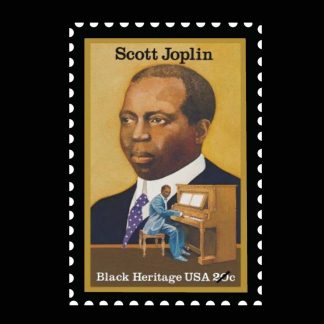