Quarter tuition (10 weeks): $350. YOU MAY CHOOSE THE VIDEO STREAM OR IN-CLASSROOM ATTENDANCE. FOR THE VIDEO STREAM, ONLY ONE TUITION PER HOUSEHOLD IS NECESSARY.  CLASSROOM TUITION IS $350 PER PERSON. (PLEASE NOTE THAT CLASSROOM SEATING IS LIMITED.)

Germany is a totally unique country in the European community, without a period of Roman colonization, without a period of Medieval dynastic unification, without an early modern patriotic movement. It was created as a country even later than was Italy in the 19th century. Our 30-week course devotes the Fall quarter to the period before there were “Germans”, with Romans across the Rhine looking into the dark German forests, the period of Charlemagne, and of the beginning of the Holy Roman Empire. During the Winter quarter we explore the Reformation, the Renaissance, and early modern Germany.

During the Spring quarter we explore the rush to German unification led by Prussia and proceed to World War I, the rise of Hitler, and World War II. 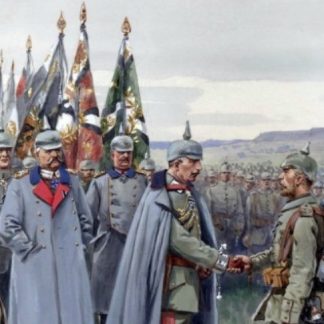